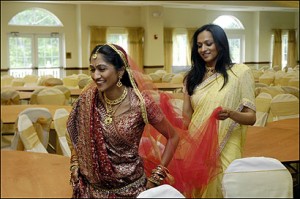 HUDSON — It was a typical romance: The couple, now in their mid 20s, met at Tufts University, where they lived in the same dorm. They fell in love. And on a sultry Saturday in July, with families and friends in attendance, they are getting married.

But that’s where anything typical ends.

At 11:30 a.m., the wedding of Indian-American Shveta Sinha and Jeremy Stern, who is Jewish, begins when the bridegroom’s family dances across the parking lot of the Riverview at the Hudson Portuguese Club — the blond groom in a golden turban, Indian music blaring from a car stereo — to meet the bride’s family under an arched gate. Inside, the ritual-filled Hindu ceremony continues after the bride, in a brilliant dark red, bejeweled sari, her arms festooned with bangles, enters on the arm of her father to throw a wreath of flowers around her groom’s neck. After sunset, the couple, in Western wedding finery, will complete their festivities under a chuppah in a Jewish ceremony.

For this multicultural affair, stretching over two days (the night before the wedding, there was a henna and music party), they have to feed many guests — 200 to 300. So the bride’s mother, Geeta, and father, Birendra, both physicians who live in Hudson, did what many Indian families do: They pulled out all the stops and called in Vinod Kapoor.

Kapoor and his son, Sorabh, own the catering company that is part of their Bombay Club restaurant in Harvard Square. They do the creme de la creme of Indian weddings in this region. For the Sinha-Stern celebrations, that means buffet food with six stations on Friday night, lunch after the Hindu ceremony, and a formal dinner after the Jewish ceremony, when a caterer from Long Island, brought in by the groom’s family, will also offer festive dishes. The heady scent s of masala-spiced vegetables and tandoori chicken in a butter sauce will share tent space with that of rack of lamb.

Sinha explains that she and her bridegroom decided they wanted to honor both cultures in their wedding. Neither was available to do the actual planning. Sinha, 26, is in school at Lake Erie College of Osteopathic Medicine at Bradenton in Florida, and Stern, 27, is working and planning to go to business school. So their mothers did the event, starting more than a year in advance. “Luckily, my mother and his mother [Barbara Stern] are fantastic at planning excellent parties,” says Sinha. “I haven’t done anything.”

Food is woven through the Hindu wedding traditions from the very beginning of the ceremony, when the bride’s mother welcomes the bridegroom by feeding him rice in front of the wedding hall. During the ceremony, the bride and groom make food offerings and then feed each other morsels as a sign of mutual love.

In the kitchen, as the ceremony continues, both Kapoors calmly preside over frantic activity. One cook sprays and scrapes a griddle repeatedly to season it, finally telling head catering chef Ajay John that it is just right. Then the making of dosas, Southern Indian crepes, begins. Another cook expertly twirls and then flips vada, salty, savory lentil and rice dumplings, into hot fat so that they pop up looking like golden doughnuts. Yet another rolls poori dough flecked with fenugreek into thin pancakes that puff magically when dropped into bubbling oil. All around the Kapoors, staff members carry buckets of ice for the mango and almond punches, run bowls of coconut and tomato chutney to the table, and ladle sambhar, a spicy broth filled with vegetables, into copper pots.

Elaborate weddings are typical in Indian families, says the elder Kapoor. They “spend money on education, and they spend money on weddings.” For the evening events, Kapoor’s crew had to set up two portable 450-pound tandoor ovens, which they brought by truck and lit outside the kitchen to roast seekh kebab Avadh (seasoned ground lamb), chicken kebabs, and other meats over charcoal. Naan (flat bread) had been slapped against the searing hot oven walls to toast to a lovely brown, and the guests can also choose the vegetarian amchoori bhindi (okra with spices).

The young couple look rapturous, if a little dazed, on their special day, as women in vivid saris in lime green and plum mingle with guests in black cocktail dresses and suits. Vinod Kapoor is stopped by almost every other Indian guest, many of whom explain that his company has done their weddings. “Indian weddings are very, very large,” he says, so his group has catered events for as many as 900 guests and participated in other weddings that included breakfasts, lunches, and dinners over three days. “People get hungry when they see me,” he says. “They might not know me, but they know my food.”

About 80,000 Indians live in the Boston area, says Kapoor; there are also about 40,000 people from Pakistan, Sri Lanka, and Bangladesh. In this relatively small community, many are often guests at the same weddings, says the caterer, making it important to offer different dishes each time.

For this wedding, there were seven meetings between the families and the caterer, and many tastings, to tailor the menu to their wishes. The vegetarian South Indian menu was chosen for lunch because it’s lighter. Sometimes the bride’s and groom’s families can’t agree, Kapoor says, mentioning one circumstance in which the Muslim side of the family and the Hindu side finally had to agree to two separate meals — one vegetarian for the Hindus, one including meat for the Muslims.

Bombay Club’s catering expanded in 2000, when Sorabh Kapoor, now 28, graduated from Boston University’s School of Hospitality and joined his father. They also do smaller parties and other kinds of events. Recently, they catered an all-Sri Lankan dinner for 700 Lion’s Club members from that country, who were in Boston for a conference. Kapoor’s wife, Shikha, develops all the recipes for the catering and for all of the family’s restaurants — they also own Masala Art in Needham, Curry Leaf in Natick, and the takeout Bombay Club in Faneuil Hall Marketplace.

As elaborate as Indian -American weddings can be, says Sorabh Kapoor, they’re relatively modest compared to weddings in India, where ceremonies can go on for a week. The Kapoors are first-generation Indians who came to the area from New Delhi about 25 years ago . The Kapoor family returns often to India to visit, look for new dishes, and sometimes attend family weddings. “My niece had 18 ceremonies,” says the elder Kapoor. Here, he says, because of the number of weddings, “the Hyatt is discussing putting in a tandoor” so that portable ones won’t have to be rolled in under the hotel kitchen’s exhaust fans. Last year, Bombay catered about 80 weddings, and the father and son expect to do more than 100 this year. They keep their prices below those of many other caterers — about $24 per guest for a casual buffet to $34 for a sit-down dinner. The events are also good advertisements for his restaurants, says Kapoor, who is thinking about buying a hotel in the western suburbs with his son.

At the wedding lunch, guests line up for food. The cooking staff has to work hard to keep pans of freshly made dosas and delicate pooris filled. Guests sip mango punch, nibble on crunchy papadums shaped into cones and salty vada, and spoon up lemon rice and sambhar. As the groom, the bride, and her mother return from a photo session, the elder Kapoor surveys the scene in the kitchen.

“Everybody wants their food hot,” he says as cooks carrying fresh dosa are waylaid by hungry guests on their way to the table. Kapoor smiles. Tonight his array of Indian sweets will share the limelight with a Viennese dessert buffet. It’s all a day in the life of an Indian caterer.

To see the original source and author of this please go to this URL:
http://www.boston.com/ae/food/articles/2006/07/26/are_those_matzo_balls_in_my_vindaloo/ 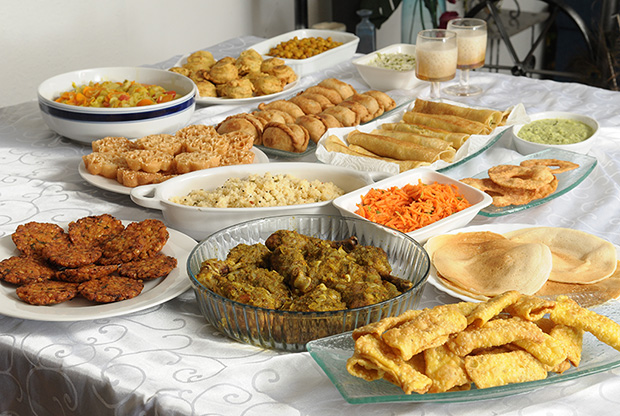 0
One of Israel’s well-known traditions is “the great trip to the East” that young adults take after completing their army service—whether it’s to “find...