Being a tourist here is a singular experience because the people aren’t used to seeing visitors.

I was interested in including Bangladesh in our tour to Asia, but there would be problems involved, the main one being that as Israelis, my wife and I were not allowed into the Muslim country. An Israeli diplomat in Asia told me about Mordecai Cohen, who grew up in what is today Bangladesh. I contacted him in Kolkata, where he now lives, and planned how to get our Bangladeshi visas using our foreign passports. An Asian Bangladeshi mission kindly granted us visas and even warned us about the traffic in Dhaka.

We arrived in Kolkata, where we were made very welcome by Mordy and Jo Cohen. Mordy’s great-grandparents, Jews from Iran and Iraq, settled in East Bengal in the 1800s in what was then India. Very few Jews settled in East Bengal, as opposed to West Bengal, which had a thriving Jewish community of more than 5,000 at its peak in and around Kolkata (then Calcutta).

When the Indian subcontinent became independent from Britain in 1947, it was partitioned between India and the divided country of East and West Pakistan.

Mordy went to school in Rajshahi in East Pakistan and was one of the pioneers of television in Dhaka (then Dacca), which was its capital. He was an announcer and news reader in English and two local languages.

Each news broadcast was accompanied by “the news, presented by Mordecai Cohen.” Mordy had attended school with boys who later held important positions in the government and in the defense services. He gave us the name and phone number of a former cabinet minister in Dhaka if we encountered any problems there. After the Six Day War in 1967, questions were raised about the Jew presenting the news. His parents, who were still living in Rajshahi, were threatened and were given police protection. He and his parents left for Calcutta in 1968.

Mordy told us about his uncle, Gen. J.F.R.

(Jack) Jacob, who was born in Calcutta in 1923. In 1941, after hearing reports of the Holocaust, he enlisted in the Indian army, which was under British command. After completing an officer’s course, he served in North Africa, Burma and Sumatra. By 1971 he had been promoted to chief of staff of the Eastern Command of the Indian army.

It was the year that East Pakistan started a guerrilla war against the Pakistani army, as the East Pakistanis (Bengalis) were very unhappy with being ruled by West Pakistan and Bengali not being accorded the status of an official language. The army retaliated by ruthlessly raping and killing local students, academics and Hindus who still remained in East Pakistan. Ten million East Pakistanis fled their homes to seek refuge in neighboring India. The leaders of the liberation struggle appealed to Indian prime minister Indira Gandhi for help, and it was left to Jacob to plan an invasion and defeat the Pakistan army.

It was a difficult project as, besides having to cross wide rivers, it was the height of the Cold War and although the USSR was an ally of India, the US, an ally of Pakistan, positioned its Seventh Fleet in the Bay of Bengal. He planned a short war and within two weeks he met General Niazi, the head of the Pakistan army in Dacca and instead of getting a hoped for cease-fire, Niazi surrendered to him. The Pakistan army of 93,000 had surrendered to a Jew and, in doing so, had created the new Muslim country of Bangladesh. It was one of the biggest surrenders in the history of warfare.

Jacob wrote a book on the war, Surrender at Dacca: Birth of a Nation, which has been translated into many languages, including Hebrew. He has been invited to Israel and has been a guest of its prime ministers. After he retired from the army, he served as the governor of the Indian states of Goa and Punjab. Today he lives in New Delhi and recently told me that Bangladesh was going to present him and Indira Gandhi (posthumously) with a gold medal this year, the 40th anniversary of independence.

WE VISITED the Liberation Museum in Dhaka, where only one panel is devoted to the Indian army, and Jacob’s name is not mentioned. It reminded me of my visit to Darjeeling in northern India, the birthplace of Sherpa Tensing Norgay, who accompanied Edmund Hillary on the conquest of Mount Everest. There is a museum devoted to Norgay and his climb up Everest, and right at the end of the exhibits it says that he was accompanied by Hillary.

We decided to plan and pay for our Bangladesh trip in Kolkata, as we could not draw any money there with our Israeli credit cards. We took dollars with us for meals and any other expenses. We also took the precaution of leaving our Israeli passports and Hebrew documents in Kolkata.

Our visit to Dhaka, a city of 13 million, was spoiled by the impossible (read “impassable”) traffic congestion.

Thirty years ago Dhaka had a population of only a million. The traffic consists of new cars, old buses and tens of thousands of artistically decorated threewheeled bicycle rickshaws. Rickshaw art can be described as colorful moving graffiti and adds to the character of Bangladesh.

To get anywhere took hours, but we did manage to get to the National Assembly building, a very impressive piece of architecture and the largest parliament building in the world. Our guide told us it was designed by an American, Louis Kahn. As Khan is a very common last name in Pakistan, we assumed he was a Muslim.

I later learned that he was a well-known Jewish architect from Philadelphia, and that this building is considered by some to be his finest.

We visited the harbor area on the river where ferries of all sizes take passengers to various parts of Bangladesh. There were also little boats loaded with colorful fruit, such as pineapples and green coconuts.

From Dhaka we took a bus trip to Cox’s Bazaar, in the extreme southeast of the country. It was supposed to be a nine-hour trip but took 14 hours due to an accident and the great volume of traffic using the narrow, twolane road, which is in very poor condition. On the positive side, the bus was very comfortable, and there were frequent toilet stops.

At one of the rest stops, we got talking to a young photojournalist. He sometimes did work for an American newspaper and his English was very good. When we told him we were tourists, he said, “Tourists in Bangladesh! That’s funny.” We did not meet any white tourists, only a few aid workers.

Cox’s Bazaar reminded me of Eilat, as it is a holiday resort by the sea, the Bay of Bengal, and far from the center of the country. It boasts 120 km. of sandy beach, the longest natural beach in the world. From there we rented a car with a driver and did a day trip to the southernmost corner of the country, wedged between the Bay of Bengal and Myanmar. We visited the Taknef Park, which has a herd of wild elephants. We only saw their large footprints but did manage to become attached to a few leeches.

Returning to Cox’s Bazaar, we drove the last 30 km.

next to the beach, which was dotted with picturesque fishing boats, each with its high, pointed front and back. Early the following morning we walked on the beach, where souvenir peddlers were selling their wares to local and Indian tourists. There were also fishermen repeatedly walking into the sea with their nets and pulling them in, but the fish were very small. I decided not to swim, as there are many rivers emptying into the Bay of Bengal and they pass through the most populated and poorest region of the world.

Our last stop was Chittagong, the larger of Bangladesh’s two ports. Our guide’s name was Joji. He was born in Libya, where his Bangladeshi parents worked for many years, and was 16 when his parents returned to Bangladesh. Chittagong has a huge garment industry, and Joji took us to an industrial park with 5,000 apparel factories. We visited the yards near Chittagong, where giant ships are beached and dismantled by hand. The industry has come under international criticism for employing children and the many deaths and injuries that befall the workers. Many of the factories have large signs at the entrances saying they do not employ children. Bangladesh is the most densely populated country in the world – more than 1,000 people per square kilometer – and its 160 million people work wherever they can find it. For many, the choice is simple: work in the ship-breaking yards or starve.

One quiet corner in the heart of Chittagong is the World War II British and Commonwealth cemetery. In this immaculately kept cemetery with edge-to-edge green lawns, we found one Jewish grave with a Magen David on it, of a 19-year-old RAF sergeant from England.

We photographed it, and Joji and the caretaker came to see what we were photographing but did not ask any questions.

Our guide took us to the immaculately kept Bhatiari golf club, hoping to eat lunch in the restaurant, but it had been booked for a party. Right next to the clubhouse was a small mosque where worshipers were performing their midday prayers.

We drove to a riverbank, hoping to see the sunset, but as soon as we approached it, we were surrounded by locals and had to leave after a few minutes. Wherever we stopped, we were surrounded by locals. Most of them only had one question, “What country?” Some of them would talk to us, and many of them posed next to us for their friends to photograph. A white person is a source of intense interest.

In spite of the present and a former prime minister being women, a Bangladeshi woman can only book into a hotel if she is accompanied by her father or husband.

Unfortunately, we could not visit the Chittagong hill tracts, the most picturesque and interesting part of the country. It has a high incidence of a virulent type of malaria and, because it is a problematic tribal area, we would have had to engage a police escort.

The hotels we stayed at were good, and so were the restaurants. The problem with being a tourist in Bangladesh is that the people aren’t used to tourists.

Our guide in Dhaka spoke very poor English and didn’t even know which banks change foreign currency or which places to take us, while none of our drivers spoke English.

We were in Bangladesh a few days before the Id al- Adha festival, celebrated by slaughtering a male animal, and in every town and village we went through, there were rows of bulls of all sizes waiting to be sold.

I asked a few of the people we met why so many terrorists have Pakistan connections and yet one never hears of a Bangladeshi terrorist. No one could give me an answer, but maybe the answer lies in the name. Pakistan is the Islamic Republic of Pakistan, while Bangladesh is the People’s Republic of Bangladesh.

To see the original source and author of this please go to this URL:
http://www.jpost.com/Travel/TravelNews/Article.aspx?id=217443 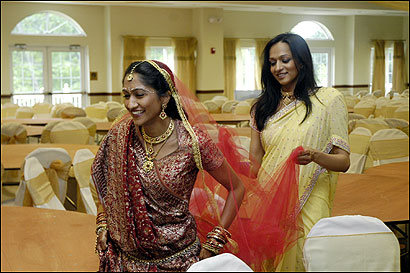 Article: Are those matzo balls in my vindaloo?

0
A Hudson wedding unites a couple and their Indian and Jewish traditions HUDSON -- It was a typical romance: The couple, now in their mid...