There is an apocryphal story about two Indians sauntering down a New York city avenue having a bawdy conversation in Hindi. One of them glances around to see another Indian within earshot, smiling at their verbal excesses.

“So you know Hindi and overheard our conversation,” says the first desi accusingly. “Just me?” ripostes the accused. “Half of New York speaks Hindi.”

A similar sentiment was expressed in the Bollywood blockbuster Kal Ho Na Ho, a movie set and shot entirely in New York City. This is New York, muses heroine Preity Zinta at the start of the movie, where it is said every fourth face is that of an Indian.

Gross exaggerations both. The Indian population in New York City is only around 200,000 according to the 2000 census â€” maybe 400,000 if you consider Greater New York (including the suburbs).

That would make it less than five per cent of the region’s population. Still, you get the feeling there are an awful lot of Indians around because visiting Indians typically tend to wander around Manhattan, where news stalls, cabs, and Wall Street involve a disproportionately large number of desis.

If you hail a cab, there is a good chance the patter on its two-way radio will be in Punjabi. In fact, New York is the greatest Jewish city in the world. For the longest time, it had more Jews than any other city, Jerusalem and Tel Aviv included.

The first Jews arrived here some 350 years ago. By the middle of the last century, the city had two million Jews, constituting a full quarter of the population.

Since then, the Jewish population is said to have fallen by half because of migration to other American cities (principally Miami) and declining birthrates.

Remarkably, the Jewish exodus from New York has coincided with the arrival of South Asians into the city, as a result of which Punjabi and Gujarati now jostle with Hebrew and Yiddish in this polyglot city.

In some quarters, Indians are starting to be known as the New Jews because of their thrift and industry. There are cases of Indians buying out Jewish businesses as older Jewish families head for sundown in Florida, the younger generation having acquired higher education and gone into professional services.

So you have the Patels (ah, them again) of Red Bank, New Jersey, taking over a cornerstore from the Crupis who bought from the Kershenbaums who bought it from the Lippers, who are now retired in Florida.

The undeniable spread of the Indian influence is illustrated by two recent episodes. In one instance last year, Romiel Daniel, a Mumbai-born Indian Jew, took over as president of the Conservative Reno Park synagogue in Queens.

Daniel is the cantor only in his spare time; his main job is heading a lingerie export company in Manhattan. One of his first acts after taking over the mainly Eastern European synagogue was to raise funds to replace two torahs that were lost at the Beth El Synagogue in Panvel outside Mumbai.

Till this public appeal, most New York Jews did not have a clue that there is a tribe called Indian Jews numbering 60,000, some 300 of who are scattered across the US. The other incident is even more remarkable.

To see the original source and author of this please go to this URL:
http://articles.timesofindia.indiatimes.com/2005-09-18/all-that-matters/27834980_1_hindi-indian-new-jews 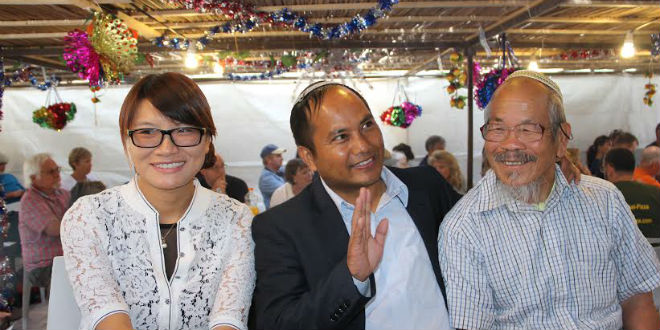 Members of Israel’s Lost Tribes: Keep Praying for Our Return to...

0
Sometimes it is a pleasure to sit in a traffic jam,” joked Michael Freund, Director and founder of Israel Returns, an organization which seeks...