Sir Anish Kapoor, CBE RA, (born 12 March 1954) is a British-Indian sculptor. Born in Bombay, Kapoor has lived and worked in London since the early 1970s when he moved to study art, first at the Hornsey College of Art and later at the Chelsea School of Art and Design.

He represented Britain in the XLIV Venice Biennale in 1990, when he was awarded the Premio Duemila Prize. In 1991 he received the Turner Prize and in 2002 received the Unilever Commission for the Turbine Hall at Tate Modern. Notable public sculptures include Cloud Gate (colloquially known as “the Bean”) in Chicago’s Millennium Park; Sky Mirror, exhibited at the Rockefeller Center in New York City in 2006 and Kensington Gardens in London in 2010; Temenos, at Middlehaven, Middlesbrough; Leviathan, at the Grand Palais in Paris in 2011; and ArcelorMittal Orbit, commissioned as a permanent artwork for London’s Olympic Park and completed in 2012.

Kapoor received a Knighthood in the 2013 Birthday Honours for services to visual arts. He was awarded an honorary doctorate degree from the University of Oxford in 2014. In 2012 he was awarded Padma Bhushan by Congress led Indian government which is India’s 3rd highest civilian award.

Early life
Anish Kapoor was born in Bombay, India (now Mumbai), to a Hindu father and a Jewish mother whose family immigrated from Baghdad when she was a few months old. According to Kapoor, his mother had an Indian-Jewish upbringing, her father being the cantor of the synagogue in Pune. At this time, Baghdadi Jews constituted the majority of the Jewish community in Mumbai. His father, from a Hindu Punjabi family, was a hydrographer in the Indian Navy. Kapoor is the brother of Canada-based academic Ilan Kapoor.

Education
Kapoor attended the prestigious all-boys boarding school The Doon School in Dehradun, Uttarakhand, India. He is said to have “hated” his time at Doon. In 1971-1973, he traveled to Israel with one of his two brothers, initially living on a kibbutz. He began to study electrical engineering, but had trouble with mathematics and quit after six months. In Israel, he decided to become an artist. In 1973, he left for Britain to attend Hornsey College of Art and Chelsea School of Art and Design. There he found a role model in Paul Neagu, an artist who provided a meaning to what he was doing. Kapoor went on to teach at Wolverhampton Polytechnic in 1979 and in 1982 was Artist in Residence at the Walker Art Gallery, Liverpool. He has lived and worked in London since the early 1970s.

Career
Anish Kapoor became known in the 1980s for his geometric or biomorphic sculptures made using simple materials such as granite, limestone, marble, pigment, and plaster.[18] These early sculptures are frequently simple, curved forms, usually monochromatic and brightly coloured, using powder pigment to define and permeate the form. “While making the pigment pieces, it occurred to me that they all form themselves out of each other. So I decided to give them a generic title, A Thousand Names, implying infinity, a thousand being a symbolic number. The powder works sat on the floor or projected from the wall. The powder on the floor defines the surface of the floor and the objects appear to be partially submerged, like icebergs. That seems to fit inside the idea of something being partially there.”[19] Such use of pigment characterised his first high-profile exhibit as part of the New Sculpture exhibition at the Hayward Gallery London in 1978.

In the late 1980s and 1990s, he was acclaimed for his explorations of matter and non-matter, specifically evoking the void in both free-standing sculptural works and ambitious installations. Many of his sculptures seem to recede into the distance, disappear into the ground or distort the space around them. In 1987, he began working in stone.[20] His later stone works are made of solid, quarried stone, many of which have carved apertures and cavities, often alluding to, and playing with dualities (earth-sky, matter-spirit, lightness-darkness, visible-invisible, conscious-unconscious, male-female, and body-mind). “In the end, I’m talking about myself. And thinking about making nothing, which I see as a void. But then that’s something, even though it really is nothing.”

Since 1995, he has worked with the highly reflective surface of polished stainless steel. These works are mirror-like, reflecting or distorting the viewer and surroundings. Over the course of the following decade Kapoor’s sculptures ventured into more ambitious manipulations of form and space. He produced a number of large works, including Taratantara (1999), a 35-metre-high piece installed in the Baltic Flour Mills in Gateshead, England, before renovation began there; and Marsyas (2002), a large work consisting of three steel rings joined by a single span of PVC membrane that reached end to end of the 3,400-square-foot (320 m2) Turbine Hall of Tate Modern. Kapoor’s Eye in Stone (Norwegian: Øye i stein) is permanently placed at the shore of the fjord in Lødingen in northern Norway as part of Artscape Nordland. In 2000, one of Kapoor’s works, Parabolic Waters, consisting of rapidly rotating coloured water, was shown outside the Millennium Dome in London.

The use of red wax is also part of his repertoire, evocative of flesh, blood, and transfiguration. In 2007, he showed Svayambh (which translated from Sanskrit means “self-generated”), a 1.5-metre block of red wax that moved on rails through the Nantes Musée des Beaux-Arts as part of the Biennale estuaire; this piece was shown again in a major show at the Haus Der Kunst in Munich and in 2009 at the Royal Academy in London. Some his work blurs the boundaries between architecture and art. In 2008, Kapoor created Memory in Berlin and New York for the Guggenheim Foundation, his first piece in Cor-Ten, which is formulated to produce a protective coating of rust. Weighing 24 tons and made up of 156 parts, it calls to mind Richard Serra’s huge, rusty steel works, which also invite viewers into perceptually confounding interiors.

In 2009, Kapoor became the first Guest Artistic Director of Brighton Festival. Kapoor installed four sculptures during the festival: Sky Mirror at Brighton Pavilion gardens; C-Curve at The Chattri, Blood Relations (a collaboration with author Salman Rushdie); and 1000 Names, both at Fabrica. He also created a large site-specific work titled The Dismemberment of Jeanne d’Arc and a performance-based installation: Imagined Monochrome. The public response was so overwhelming that police had to re-divert traffic around C Curve at the Chattri and exercise crowd control.

In September 2009, Kapoor was the first living artist to have a solo exhibition at the Royal Academy of Arts. As well as surveying his career to date, the show also included new works. On display were Non-Object mirror works, cement sculptures previously unseen, and Shooting into the Corner, a cannon that fires pellets of wax into the corner of the gallery. Previously shown at MAK, Vienna, in January 2009, it is a work with dramatic presence and associations and also continues Kapoor’s interest in the self-made object, as the wax builds up on the walls and floor of the gallery the work slowly oozes out its form.

In spring 2011, Kapoor’s work, Leviathan, was the annual Monumenta installation for the Grand Palais in Paris. Kapoor described the work as: “A single object, a single form, a single colour…My ambition is to create a space with in a space that responds to the height and luminosity of the Nave at the Grand Palais. Visitors will be invited to walk inside the work, to immerse themselves in colour, and it will, I hope, be a contemplative and poetic experience.”

In 2011, Kapoor exhibited Dirty Corner at the Fabbrica del Vapore in Milan. Fully occupying the site’s “cathedral” space, the work consists of a huge steel volume, 60 metres long and 8 metres high, that visitors enter. Inside, they gradually lose their perception of space, as it gets progressively darker and darker until there is no light, forcing people to use their other senses to guide them through the space. The entrance of the tunnel is goblet-shaped, featuring an interior and exterior surface that is circular, making minimal contact with the ground. Over the course of the exhibition, the work was progressively covered by some 160 cubic metres of earth by a large mechanical device, forming a sharp mountain of dirt which the tunnel appears to be running through.

Turning the World Upside Down, Israel Museum, 2010
Kapoor’s earliest public commissions include the Cast Iron Mountain at the Tachikawa Art Project in Japan, as well as an untitled 1995 piece installed at Toronto’s Simcoe Place resembling mountain peaks. In 2001, Sky Mirror, a large mirror piece that reflects the sky and surroundings, was commissioned for a site outside the Nottingham Playhouse. Since 2006, Cloud Gate, a 110-ton stainless steel sculpture with a mirror finish, has been permanently installed in Millennium Park in Chicago. Viewers are able to walk beneath the sculpture and look up into an “omphalos” or navel above them.

In the autumn of 2006, a second 10-metre Sky Mirror, was installed at Rockefeller Center, New York City. This work was later exhibited in Kensington Gardens in 2010 as part of the show Turning the World Upside Down, along with three other major mirror works.

ArcelorMittal Orbit, London Olympic Park, 2012
In 2009, Kapoor created the permanent, site-specific work Earth Cinema for Pollino National Park, the largest national park in Italy, as part of the project ArtePollino – Another South. Kapoor’s work, Cinema di Terra (Earth Cinema), is a 45m long, 3m wide and 7m deep cut into the landscape made from concrete and earth. People can enter from both sides and walk along it, viewing the earth void within. Cinema di Terra officially opened to public in September 2009.

Kapoor was also commissioned by Tees Valley Regeneration (TVR) to produce five pieces of public art, collectively known as the Tees Valley Giants. The first of these sculptures, Tememos, was unveiled to the public in June 2010. Temenos stands 50 metres high and is 110 metres in length. A steel wire mesh pulled taught between two enormous steel hoops, it remains an ethereal and an uncertain form despite its colossal scale.

In 2010, Turning the World Upside Down, Jerusalem was commissioned and installed at the Israel Museum in Jerusalem. The sculpture is described as a “16-foot tall polished-steel hourglass” and it “reflects and reverses the Jerusalem sky and the museum’s landscape, a likely reference to the city’s duality of celestial and earthly, holy and profane”.

Cloud Gate (The Bean) at the Millennium Park, Chicago
Also in June, Kapoor’s Orbit was announced as the winning proposal for an artwork for the 2012 Olympic Games. The Greater London Authority selected Kapoor’s sculpture from a shortlist of five artists as the permanent artwork for the Olympic Park. At 115 metres tall, Orbit is the tallest sculpture in the UK.

Soon to be completed[when?] is a granite monument to commemorate the British victims of 9/11 in New York’s Hanover Square.

When asked if engagement with people and places is the key to successful public art, Kapoor said,

“ I’m thinking about the mythical wonders of the world, the Hanging Gardens of Babylon and the Tower of Babel. It’s as if the collective will comes up with something that has resonance on an individual level and so becomes mythic. I can claim to take that as a model for a way of thinking. Art can do it, and I’m going to have a damn good go. I want to occupy the territory, but the territory is an idea and a way of thinking as much as a context that generates objects. ” 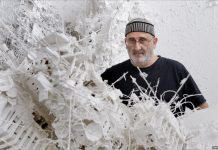 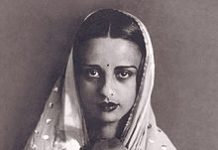 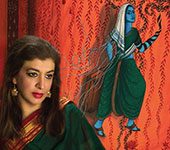 0
Muslim engraver Mohammad Abdul Yaseen serves the tiny Bene Israel or "Sons of Israel" community in Mumbai, whose origins in India go back about...