Another group of Indian Jews from the group known as ‘The Lost Tribe’ or Bnei Menashe, from Northeastern India, is due to make Aliyah. Currently numbering around 1,000 in Israel, these Jews were first recognized as such in 2005 by the then Chief Sephardic Rabbi Shlomo Amar.

Host Yael Wissner-Levy speaks to Michael Freund, the Founder and Chairman of Shavei Israel, an organization instrumental in bringing Bnei Menashe to Israel. In March 2005 these people were recognized as “Descendants of Israel,” Freund says, but they are required to undergo a formal conversion to Judaism before making Aliyah.

Although they suffer no persecution in India, Freund is confident that there is now the momentum to bring the remaining 7,000 members of the Tribe to Israel. For the past decade, almost all the Bnei Menashe who have made Aliyah have gone to live in the Galilee. 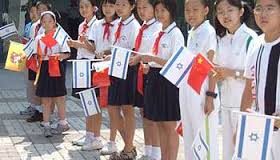 0
Israel Project sends businessmen, politicians to tell Asian audiences about the benefits of doing business with Israel. The Chinese believe Jews are good with money,...