THE JEWS OF INDIA
Home History 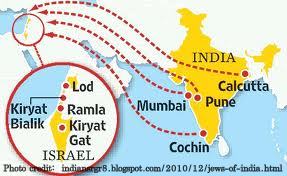 The history of the Jews in India reaches back to ancient times.  Jews in India faced no persecution from Hindus from the time they migrated to India, but they were subjugated by Christian missionaries during the Goa Inquisition from the year 1552. Portuguese invaders in the South India committed massive atrocities on South Indian Jewry in the 17th Century.

In the Papal States, which existed until 1870, Jews were required to live only in specified neighborhoods called ghettos. Until the 1840s, they were required to regularly attend sermons urging their conversion to Christianity. Only Jews were taxed to support state boarding schools for Jewish converts to Christianity. It was illegal to convert from Christianity to Judaism. Sometimes Jews were baptized involuntarily, and, even when such baptisms were illegal, forced to practice the Christian religion. In many such cases the state separated them from their families. See Edgardo Mortara for an account of one of the most widely publicized instances of acrimony between Catholics and Jews in the Papal States in the second half of the 19th century.

In the 19th and (before the end of the second World War) 20th centuries, the Roman Catholic Church adhered to a distinction between “good anti-Semitism” and “bad anti-Semitism”. The “bad” kind promoted hatred of Jews because of their descent. This was considered un-Christian because the Christian message was intended for all of humanity regardless of ethnicity; anyone could become a Christian. The “good” kind criticized alleged Jewish conspiracies to control newspapers, banks, and other institutions, to care only about accumulation of wealth, etc. Many Catholic bishops wrote articles criticizing Jews on such grounds, and, when accused of promoting hatred of Jews, would remind people that they condemned the “bad” kind of anti-Semitism. A detailed account is found in historian David Kertzer’s book The Popes Against the Jews. 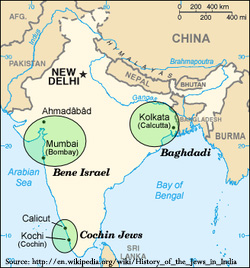 Indian Jews are a religious minority of India. Judaism was one of the first foreign religions to arrive in India in recorded history. The better-established ancient
communities have assimilated a large number of local traditions through cultural diffusion. The Jewish population in India is hard to estimate since each Jewish community is distinct with different origins; some arrived during the time of the Kingdom of Judah, others are seen by some as descendants of Israel’s Ten Lost Tribes. Of the total Jewish population in India, about half live in Manipur and Mizoram and a quarter live in the city of Mumbai.

Unlike many parts of the world, Jews have historically lived in India without any instances of anti-Semitism from the local majority populace, the Hindus. However, Jews were persecuted by the Portuguese during their control of Goa.

The Jews settled in Kodungallur (Cranganore) on the Malabar Coast, where they traded peacefully, until 1524. Jews have held important positions under Indian (Hindu) princes in the past and even after independence from British Rule, have risen to very high positions in government, military and industry.[citation needed]

In addition to Jewish expatriates and recent immigrants, there are five native Jewish communities in India: (see communities tab for further explanations).